Simone Molinaro’s motet Quae est ista quae progreditur was printed in Venice in 1597 as part of the Motectorum quinis, et missae denis vocibus, liber primus, one of the most significant publications in the history of Genoese music. The Motectorum contains eleven five-part motets and a ten-part polychoral mass that are among the most elaborate and complex works by the young composer who had previously published only one book of light secular songs.  The collection was dedicated to Matteo Senarega, the brilliant Genoese statesman who had served the city as Chancellor, Secretary of State, ambassador to the Vatican, and finally as Doge. Senarega was also an esteemed classicist whose youthful translation of the letters of Cicero to Atticus was published in 1555 by the important Aldine press founded by the humanist printer Teobaldo Mannucci.  Thus, it must have been considered a special sign of honor when the Motectorum was presented to the Doge with a rhetorically elaborate Latin dedication.  The fanciful conceits of the letter celebrate the Doge’s fame, virtue, eloquence, and musical taste.

The words of the musician, to be certain, are not without a hint of self-promotion.  Nor do they prepare the uninformed reader for the dark and sorrowful utterances that comprise the texts that follow, which Molinaro writes “are intended for the celebration of sacred events and the liturgy.”  Some of these texts, such as Miser factus sum, derive from the Penitential Psalms while the anonymous Recogitandis donis tuis emulates the penitent expressions of those sacred canticles.  The sobriety of these words and the richly expressive music that accompanies them seem to parallel the space for which these pieces may have been intended to be performed: the burial chapel in the Cathedral of San Lorenzo, Genoa, which Senarega had renovated and that bears his name.  In the original design six allegorical statues of the saintly namesakes of the Senarega family overlook opposing sarcophagi upon which are placed effigies of Matteo and his brother Giovanni Senarega, the chapel’s original patron.  Endowments were also established for the celebration of a daily Mass for the soul of the lord testator, a solemn Mass for the dead in the chapel on Fridays, intercessory prayers, the singing of hymns and the sequence Stabat mater dolorosa.  The final work, and lasting symbol of Senarega’s legacy, is the famous altarpiece The Crucifixion with Saints John, Mary, and Sebastian, by the Italian painter Federico Barocci, that was commissioned by Senarega and delivered to the city in 1596.

The exordium of Molinaro’s Quae est ista is modeled on the setting by Giovanni Pierluigi da Palestrina (1525-1594) published in the Motettorum liber quartus ex Canticis canticorum (Rome, 1584) with a dedication to Pope Gregory XIII.  Gregory had praised Senarega in a letter sent to Genoa while Senarega was ambassador to the Vatican.  In 1583 Gregory granted an indulgence for those who visited the chapel in Genoa on the feast of Saint Sebastian that is still recorded by an inscription there.  Perhaps Molinaro, by his oblique reference to Gregory through Palestrina, found a discreet way to remind the Doge of his past honor, and in this way render an eternal tribute to the noble patron.

My edition of this motet (excerpted below) and presentation “Quae est ista quae progreditur: Marian Devotion for the Senarega Chapel in San Lorenzo, Genoa,” won First Prize in the 2010 Early Music Scholars Competition where the work received its modern-day world premiere by the Chalice Consort. 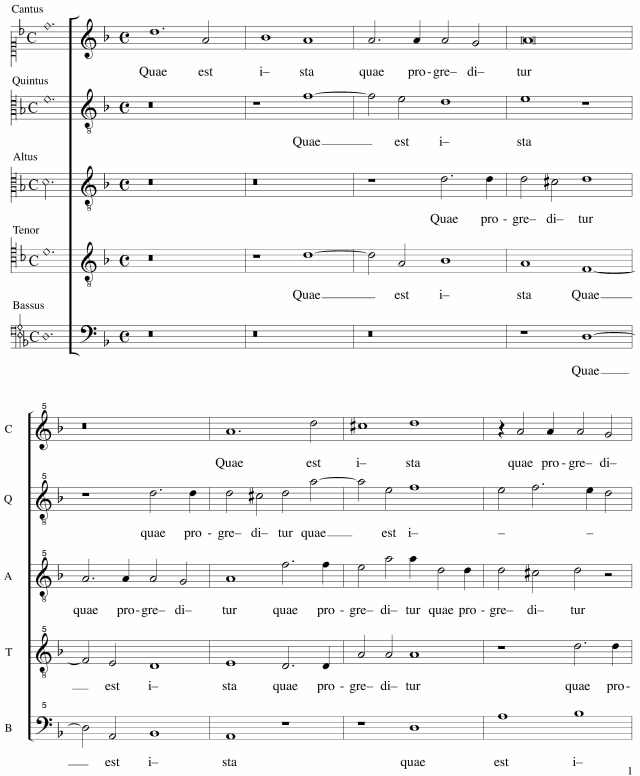